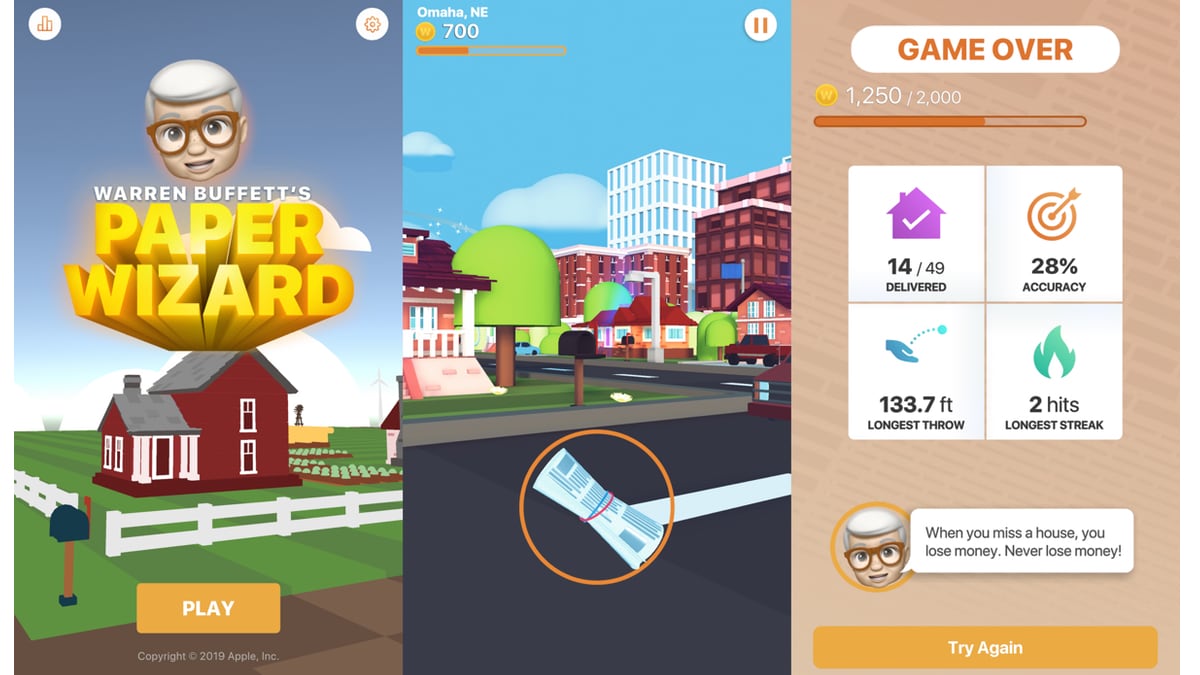 Apple has released a new iPhone game, it’s first in over a decade, starring Warren Buffett. The game is titled Warren Buffett’s Paper Wizard and is now available on the App Store as a free download. Buffett, the third richest person in the world, used to deliver newspapers when he was a young boy. He was known to hold paper-toss competitions at shareholder meetings for Berkshire Hathaway.

At Berkshire Hathaway’s annual meeting over the last weekend, Apple CEO Tim Cook made a special appearance. A short film was reportedly played ahead of the meeting, showing Buffett and Cook trying to brainstorm ideas for a new app. Cook ends up suggesting the idea for a newspaper-tossing game.

It seems like Apple’s latest iPhone game is a result of that partnership. Warren Buffett’s Paper Wizardlets players fling newspapers, rewarding them with a special currency called Warren Bucks. Players move from Omaha to Cupertino, California in the game as difficulty rises gradually.

After the game is over, users are awarded a score based on accuracy and the number of papers they were able to deliver during the game. Surprisingly, Apple hasn’t integrated Game Center in the same as of now. The game is built only for the iPhone.

The game’s developer is listed as Wildlife Designs on the App Store, but the app has Apple written all over it. The tech giant’s last game was released back in 2008, called Texas Hold’em.

Earlier in March this year, Apple launched Apple Arcade, the company’s game subscription service for mobile and desktop computers. The company is promising over 100 new titles that will be accessible on the iPad, Mac, and even Apple TV. Apple Arcade titles won’t include ads or in-app purchases.